Visits took place from 19 to 23 September in the cities of Boa Vista, Belo Horizonte, Cabo Frio, Florianópolis and Recife

The work of carrying out the 2022 Census was accompanied by a group of representatives from 25 countries, which make up the Census Observation Mission. The visit is organized in partnership between the United Nations Population Fund (UNFPA), the Brazilian Government, through the Brazilian Cooperation Agency (ABC) and the Brazilian Institute of Geography and Statistics (IBGE), and the International Labor Organization (ILO). The main objective of the initiative is to share experiences, methodologies, new technologies and good practices, in addition to strengthening the transparency of the process. The observation took place in five Brazilian states. 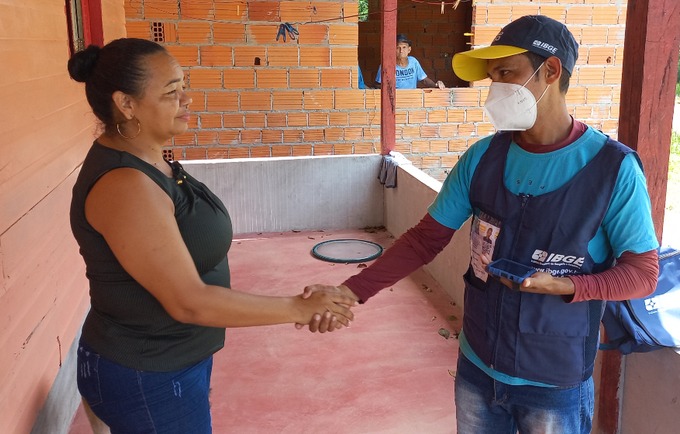 IBGE census taker in the state of Amapá. © IBGE

The visits took place in the cities of Boa Vista (state of Roraima), Belo Horizonte (state of Minas Gerais), Cabo Frio (state of Rio de Janeiro), Florianópolis (state of Santa Catarina) and Recife (state of Pernambuco). On September 26, a closing seminar will take place in the city of Rio de Janeiro. Also participating as observers are the International Organization for Migration (IOM), the United Nations High Commissioner for Refugees (UNHCR), the United Nations Children’s Fund (UNICEF) and the Centro Latinoamericano y Caribeño de Demografía (CELADE), of the ECLAC.

The Observa Censo initiative was initially planned to have two virtual stages, consisting of an informative and a technical seminar, held between 5 and 24 August. From 19 to 23 September, foreign visitors were divided into field visits in the five selected cities. They received an IBGE census taker uniform and a Mobile Collection Device to digitally monitor the data collected.

ABC’s director, Ambassador Ruy Carlos Pereira, stated that “the Brazilian Cooperation Agency (ABC), of the Ministry of Foreign Affairs (MRE), considers that the 2022 Demographic Census, as well as the modernization process adopted in this edition, represent a milestone for Brazil and will provide a faithful portrait of the current socioeconomic, geographic and territorial situation in the country, serving as a subsidy for the elaboration of effective public policies to promote the sustainable development of the country. As South-South cooperation initiative, Observa Censo promotes an environment conducive to strengthening the capacities in census and demographic matters of the 22 cooperating governments. By enabling real-time monitoring of the work of the IBGE, one of the most respected Brazilian institutions that produces knowledge, is continuously modernized and makes the country a global reference on this matter”.

UNFPA representative in Brazil, Astrid Bant, highlights that “the United Nations Population Fund is proud of the long-standing partnership with ABC and IBGE in South-South cooperation initiatives. We have already developed different projects related to carrying out censuses and demographic surveys with other countries, mainly in Latin America and Africa. This is yet another opportunity to exchange knowledge and experiences between countries, strengthening ties and technical capacities. The 2022 Census is fundamental in the process of generating demographic data to understand different aspects of the Brazilian population, such as age, gender, geographic distribution, among many others”.

For Júnia Quiroga, UNFPA’s auxiliary representative, “the partnership we have established with the IBGE, ABC and ILO to make it possible for international observers to come to know and follow in loco part of the census process in Brazil is another successful example of South-South cooperation in the country. This year, in addition to international observers, we also highlight the inclusion of the classification as “quilombola” in the race/ethnicity criterion, which optimizes the understanding of diversity in the country and favors the elaboration of more effective public policies.”

“Through Observa Censo, IBGE maintains the tradition of South-South cooperation, now innovating with its realization in real time, during the collection itself. This exchange allows countries to monitor not only the innovations built for the 2022 Census operation, but also the day-to-day difficulties faced in the field”, says Eduardo Rios Neto, president of IBGE. “I thank the partners who made this event possible, in particular the ABC, the Ministry of Foreign Affairs, UNFPA and the ILO”, he adds.

Martin Georg Hahn, director of the ILO Office in Brazil, stated that “it is with great satisfaction that the International Labor Organization participates in this important initiative alongside Brazil and UNFPA. This is a historic moment, as the Census takes place every 10 years. There is great international interest in this Brazilian experience, and the fact that Brazil is hosting more than 20 countries in the Observa Censo 2022 is proof of that. IBGE and ILO have a long-standing partnership for the production of knowledge. For example, in the last Census, we carried out a joint work on the compilation of decent work indicators, at the municipal, state and national levels. These indicators are fundamental to support the process of formulating public policies in the country”.