On 17 February 2021, over 100 participants across the world joined the virtual launching ceremony of “South-South Matchmaker, 2019-2020 Best Practices”, a publication prepared by the Secretariat of the South-South Network for Public Service Innovation (SSN4PSI). The event was co-organised by SSN4PSI; Aspire to Innovate (a2i)/the Government of Bangladesh; United Nations Development Programme (UNDP); and the UN Office for South-South Cooperation (UNOSSC). 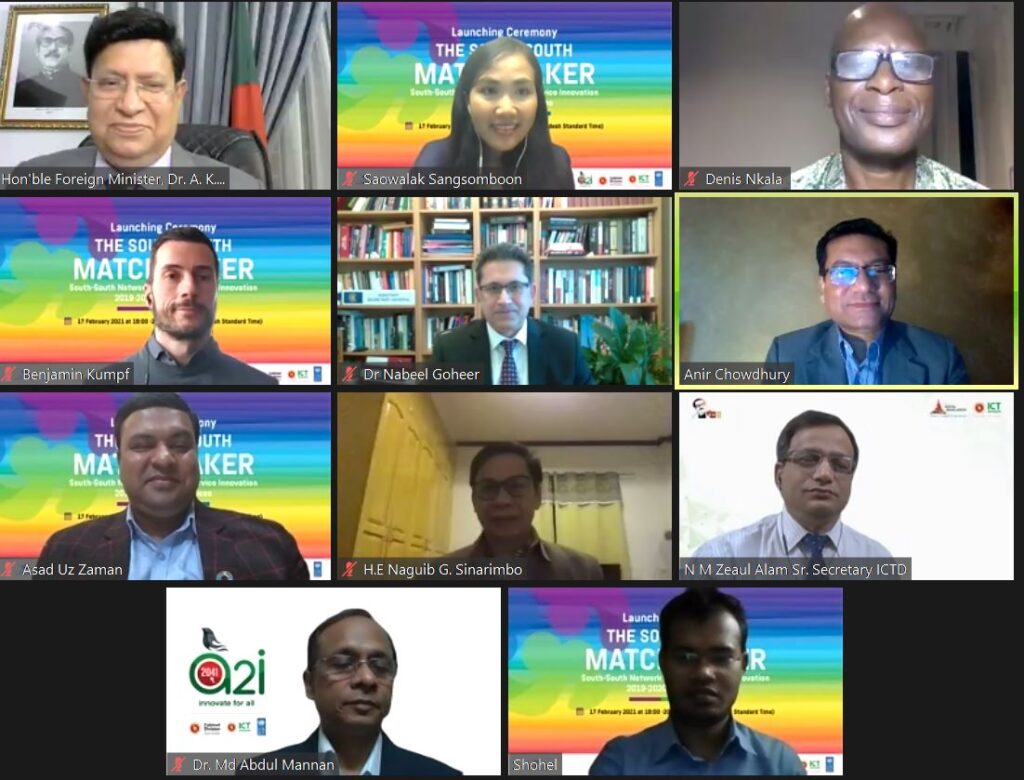 During the launch, H.E. Dr. A. K. Abdul Momen, Honorable Foreign Minister, Ministry of Foreign Affairs, Government of the People’s Republic of Bangladesh, who is also a former President of the UN High-Level Committee on South-South Cooperation, shared a ringing endorsement and support for South-South cooperation and SSN4PSI and applauded achievements of the Network.

The Minister shared  his continued belief  in borderless sharing of knowledge and ideas among the Southern nations through a dedicated platform.  He recalled efforts highlighting the importance of South-South cooperation in the implementation of the 2030 agenda at various events including the 2015 “High-level meeting on South-South and triangular cooperation in the post sustainable development agenda, financing for development in the South and technology transfer” in Dhaka, Bangladesh and at BAPA+40 in Buenos Aires in 2019 where the set up of Bangladesh’s South-South Knowledge and Innovation Centre was announced.  He noted that his faith in South-South cooperation stemmed from Bangladesh’s experience.  “In 2010, UNDP and Bangladesh did a study and found out that to achieve all the MDG goals, it would require USD78 billion investment for the five-year period. Bangladesh used its own homegrown innovations and technology resulting in expenditure of only USD9 per person to achieve the results.” He further noted that the innovations were inspired by South-South innovation and sharing. Another example he gave was Bangladesh’s progress  in climate disaster preparedness.

He noted that he had seen South-South cooperation in action during the COVID-19 pandemic. “The knowledge sharing process among countries emerged to be very practical and functional more than ever before.  We have witnessed a borderless approach to a virtual medium to manage the common challenges and replicate success cases among the developing nations,” he said.

Hon. Minister Momen said that today in development thinking there is more emphasis on growth through human development rather than economic development and added that, “it is the right design to remedy the effects of poverty, health and economic inequality, unfair trade rules and the negative economic consequences of trade liberalization or globalization in developing countries”. As a result, he emphasized that  we need stronger South-South cooperation to establish these human rights. “This is even more valid after the devastation of the COVID-19 pandemic, as this unprecedented global health and economic crisis calls for an equally global and exceptional concerted policy response,” he added.

He commended SSN4PSI on its remarkable achievement  connecting 39 countries. “The strong partnership among the 39 countries to mitigate their common challenges should be an example to the other nations worldwide”. He encouraged other LDCs, LLDCs and SIDS to come under the same umbrella by joining the Network and to help each other through knowledge sharing. He strongly recommended engaging the private sector in the efforts and the activities of the Network.

The Hon. Minister reiterated continued support for South-South cooperation from the Government of Bangladesh, especially the Foreign Ministry,  to expand the Network to more countries globally. He requested UNOSSC’s continued collaboration with the Network. He pledged that the Foreign Ministry and its Missions will ensure all the support from their end to UNOSSC and the SSN4PSI in advancing South-South Cooperation.