The proposed report aims to investigate and analyze with concrete case examples how digitalization can accelerate regional integration in Africa by facilitating the implementation of the African Continental Free Trade Area (AfCFTA) and ensuring that the promised socio-economic gains of the AfCFTA come to fruition. In particular the study will:  a) analyze first the factors that could potentially constrain the operationalization of the AfCFTA, including an understanding of the risks underlying the implementation of the AfCFTA;  b) assess how digitalization and the range of available digital technologies from the Third and Fourth Industrial Revolution could facilitate the effective implementation of the AfCFTA and address these risks so that the AfCFTA delivers on its promised gains which include boosting intra-African trade, creating jobs and promoting structural transformation; c) highlight what other non-African southern regional economic blocs are undertaking in relation to harnessing digitalization as an enabler of regional integration through case examples and flesh out comparative lessons from the Southern blocs for Africa; and d) highlight case studies from EAC, ECOWAS, COMESA and SADC where digitalization is facilitating or could facilitate regional trade and integration and drawing lessons for the continent.

UNOSSC in collaboration with UNECA-SROSA and UNECA Digital Center of Excellence aims to release a second report titled “South-South Cooperation for Harnessing Digitalization for Africa’s Industrialization.”  The goals of the proposed publication are to examine how digital technologies are facilitating Africa’s industrialization and look at the roles of South-South Cooperation (SSC) in Africa’s digitalization initiatives. The report aims to gather expert contributions that discuss the opportunities and challenges posed by Industry 4.0 for African industries. It describes how digitalization can support Africa’s industry, backed by case studies and examples from the region and how South-South Digital Cooperation (SSDC) can support this process. It assesses how digital initiatives at the national and regional level can be instigated within the existing national and regional development frameworks and agendas in Africa. The report seeks to examine the kind of framework that can be developed to promote digital development in African countries. It delves into the type of national and regional support that can be provided to build digital infrastructures and harness digital technologies effectively to support industrialization in Africa and critically the role of SSDC within it.

Both reports are expected to be published and launched in early 2021and will be widely disseminated across Africa and North America at various international policy events. 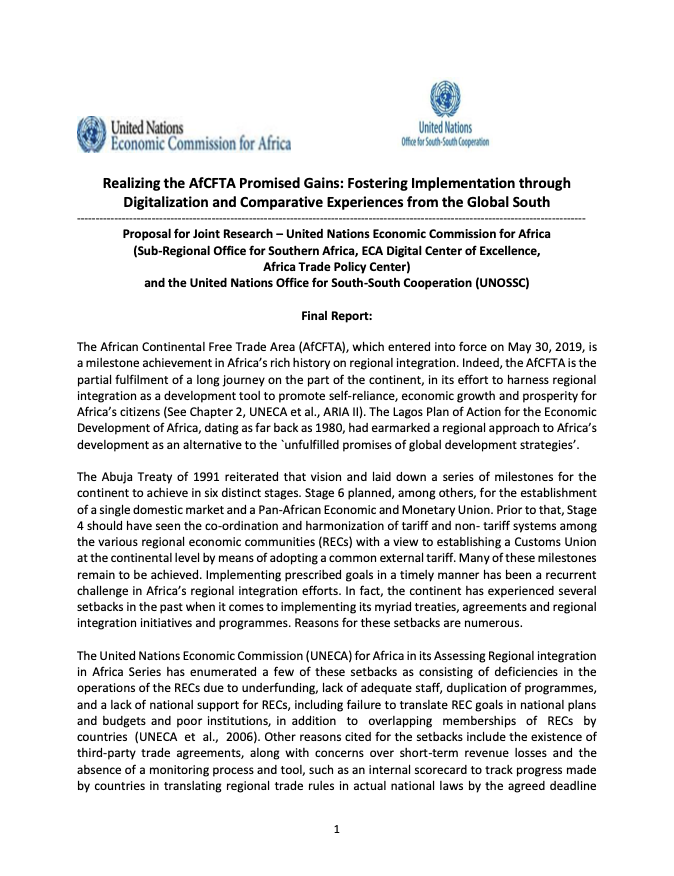