ILO – Informality and the Potential for South-South Cooperation Between BRICS

The BRICS are a driving force in the global economy, and the global labour market, representing almost 44 per cent of the word’s labour force. Overall, the BRICS countries (that is Brazil, Russia, India, China and South Africa) have seen a significant move away from vulnerable employment towards wage employment of 6.6 percentage points, well in excess of the world average excluding BRICS of 1.6 percentage point (BRICS brief series 2016).

Informal employment is most prevalent in India, in variety of sectors more so in form of street vendors, home –based and sub-contracted workers in the supply chain, as well as other forms of self-employment. In China, informal employment is concentrated among rural migrants and workers retrenched by the erstwhile state and collective enterprises, largely in construction, small workshops, domestic work and self-employment. In Brazil, it is based largely in low –skilled intensive sectors such as agriculture, construction, hotels and restaurant, domestic work and wholesale and retail trade. It is seen that salaried workers are higher in Russia, followed by China. India has only 18 percent of salaried workers among the BRICS countries. On the other hand, the share of self-employed workers is the highest in India followed by Brazil and South Africa. 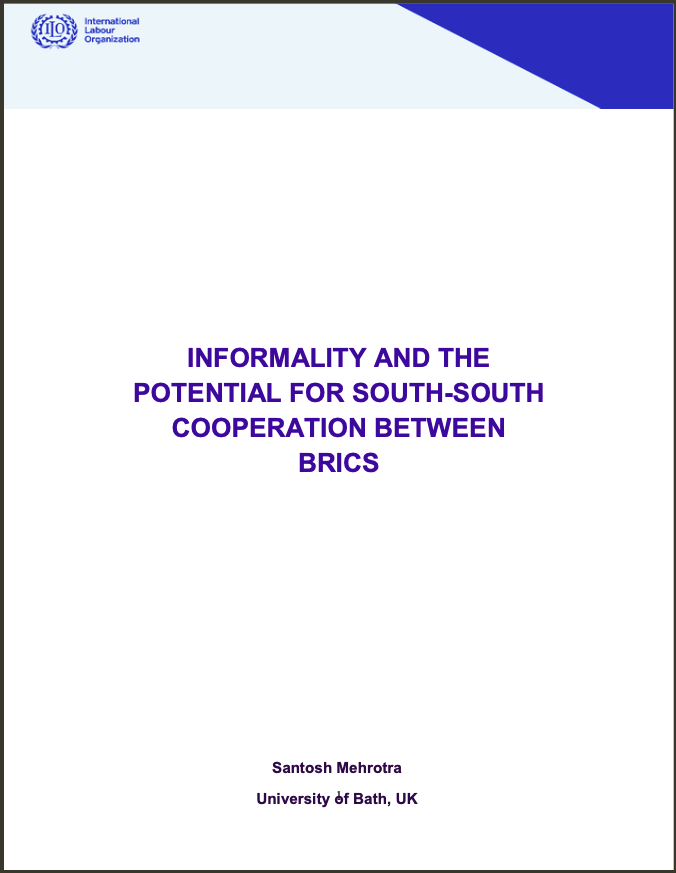 At the other end of the spectrum, the informal economy is seeing an influx of high –skilled qualified youths, mostly women, engaged as workers in the rapidly growing platform economy, but without proper labour contracts and social protection coverage. Inadequate capacity and coverage of state labour inspections apart from the emerging model of production as a result of globalization are also known to have contributed to gradual informalisation of the formal economy in the BRICS countries.

This publication aims to promote South-South cooperation between the BRICS countries on the transition to formality from informality. Through country-specific coordinated actions and capacity building to implement the ILO Recommendation No. 204, transition to the formal economy is a major policy goal identified by BRICS countries in successive BRICS summits. It, therefore, makes a series of recommendations for BRICS governments for the Delhi Summit (2021) and beyond.