Report on the Exchanges for South-South Cooperation by China-Africa Institute, CASS

Home » Report on the Exchanges for South-South Cooperation by China-Africa Institute, CASS

Report on the Exchanges for South-South Cooperation by China-Africa Institute, CASS

China-Africa Institute, CASS (hereinafter referred to as “the Institute”) has focused its research on contemporary political and economic development, international relations, and society and culture in the Middle East and African countries and regions, while also attached importance to academic exchanges and cooperation with the target countries, including carrying out joint research, hosting academic conferences, and conducting training, etc. 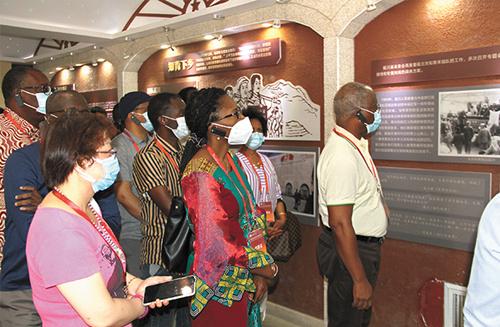 Since 2019, the Institute has established 37 China-Africa joint research projects that cover a wide range of sectors, such as China-Africa infrastructure cooperation under the framework of “the Belt and Road Initiative”, digital economy development in African countries, Africa’s urbanization path, and the impact of the COVID-19 pandemic on Africa and China-Africa cooperation. Foreign partner institutions include the University of Johannesburg, South Africa; Africa Policy and Leadership Institute, Kenya; Addis Ababa University, Ethiopia; Southern African Research and Documentation Center, Zimbabwe; University of Botswana; University of Yaoundé I, Cameroon; Malawi University of Science and Technology; and Amadeus Institute, Morocco, etc.

In 2019, the Institute organized two rounds of scholars from African countries to visit China, which invited a total of 24 scholars from more than 10 African countries, including Namibia, Zimbabwe, Nigeria and South Africa. The scholars were organized to visit the Communication University of China, the University of Chinese Academy of Social Sciences, the Rural Development Institute, CASS, the International Poverty Reduction Center in China and other universities and think tanks in Beijing for seminars, and went to Shaanxi for research, visiting the Yangjialing Revolutionary Site, the Yan’an Beijing Zhiqing Museum and Liangjiahe Village to learn about the practice of the Chinese revolution, development and reform under the leadership of the Communist Party of China (CPC).

From July 29 to August 1, 2021, on the occasion of the 100th anniversary of the founding of the CPC and the overall victory in China’s battle of poverty reduction, the Institute organized the “Yan’an Tour Series”, inviting more than 10 African ambassadors and African students in China to conduct field research at the Nangou Village Industrial Poverty Alleviation Demonstration Base and the old site of the Zaoyuan Revolution, etc. Meanwhile, the Institute also invited the ambassadors to participate in the international seminar on “The Yan’an Spirit and Poverty Alleviation in China” hosted by the Institute and co-organized by the Foreign Affairs Office of Shaanxi Provincial Government, as well as the 11th Ambassador Lecture hosted by the Institute. These activities offered the ambassadors an opportunity to gain a deeper understanding of China’s overall victory in the battle against poverty and were widely reported by different media including the China Daily and Reference News.

For example, on September 7, 2020, the “First China Lecture: China’s Practices and Achievements in Poverty Reduction” was held in Beijing. Mr. Wu Guobao, Research Fellow of the Rural Development Institute, CASS, Mr. Salde Ngalande, Director of the Belt and Road Joint Research Center of the University of Zambia, and Mr. Li Xinfeng, Director of the China-Africa Institute , gave speeches on “China’s Achievements and Experiences in Poverty Alleviation”, “The Stories of Poverty Alleviation in Yan’an with Chinese Characteristics” and “Precise Poverty Alleviation in Western Hunan Province” respectively. More than 90 experts and scholars from Zambia, South Africa, Namibia, Nigeria and Kenya attended the Lecture. The African scholars agreed that China had made remarkable achievements in poverty reduction and accumulated many successful experiences. Africa could learn from China’s experience, and explore the suitable path of poverty reduction based on the national conditions of different countries in the continent; China-Africa cooperation in poverty reduction would make a positive contribution to the cause of global poverty reduction.

On July 6, 2021, the “9th Ambassador Lecture: Poverty Alleviation in Xinjiang from the Perspective of African Ambassadors to China” was co-organized in Beijing by the Institute with the National Think Tank for Xinjiang, CASS and supported by the China-Africa Friendship Group of the National Committee of the Chinese People’s Political Consultative Conference. António Embaló, Ambassador of Guinea-Bissau to China, and Martin Chedondo, Ambassador of Zimbabwe to China, delivered a keynote speech respectively. Comments were made by Rahamtalla M. Osman, AU Permanent Representative to China, and Simon Indongo, first secretary of the Namibian Embassy to China. More than 90 scholars attended the Lecture. The African ambassadors attending the event said that China’s path to poverty alleviation had not only benefited the Chinese people but also made outstanding contributions to the cause of global poverty reduction. China-Africa friendship has a long history and the two sides should jointly promote deeper China-Africa cooperation under the framework of the Forum on China-Africa Cooperation mechanism.

In addition to the “three lectures” series, the Institute has also organized other important international conferences related to poverty reduction.

For example, on June 22, 2021, the Institute co-organized with the Mission of the People’s Republic of China to the African Nations (“Mission of PRC to AU”) and the Economic Commission for Africa (“ECA”) an international seminar on “Putting People First – Celebrating the 100th Anniversary of the Founding of the Communist Party of China and China-Africa Cooperation on Poverty Reduction”. Zhou Yunfan, Wang Lincong and Wang Xiaoming, Deputy Directors of the Institute, Liu Yuxi, Head of the Mission of PRC to AU, Thokozile Ruzvidzo, Director of Gender, Poverty and Social Policy Division of the ECA, Albert Muchanga, Commissioner of the Department of Economic Development, Trade and Mining of the AU, Ambassador Jean-Léon Ngandu Ilunga, Chairperson and Permanent Representative of the DRC to AU, and Rahamtalla M. Osman, AU Representative in China, etc. delivered speeches online. Experts from the South-South Dialogues, a Kenyan think tank, the African Leadership Institute of the University of South Africa, the Centre for Dialogue, Research and Cooperation of Ethiopia, and the College of International Development and Global Agriculture of China Agricultural University participated in the conference. They believed that China and Africa were like-minded and natural allies faced with common development tasks, and helping African countries to reduce poverty, achieve sustainable development, and enhance the well-being of the African people was an important part of the content in building a community of shared human destiny between China and Africa.

To promote the experience exchange of China-Africa state governance, further, deepen China-Africa friendship and promote China-Africa common development, the Institute has been working with the University of Chinese Academy of Social Sciences since 2019 to organize 14 training courses for experts and scholars from African countries, such as the South African Workshop on Economic Governance, the Workshop on Poverty Reduction and Sustainable Development in Sierra Leone, the China-Ethiopia Workshop on Industrial Cooperation under the Belt and Road Initiative and the China-South Sudan Workshop on Economic Cooperation under the Belt and Road Initiative, etc. A total of 554 African officials and scholars have received training and gained an in-depth understanding of China’s experience in poverty eradication.