“The fastest developing countries of the South have the latest technology and the latest methodologies. These are cutting edge solutions for attainment of the SDGs. We need to sincerely appreciate and exploit this new order. We also seriously need to invest in learning on good practices and lessons learned from the ongoing South-South cooperation. It is crucial that we actually build on the past lessons and success!” (Mr. Norimasa Shimomura, 2021) 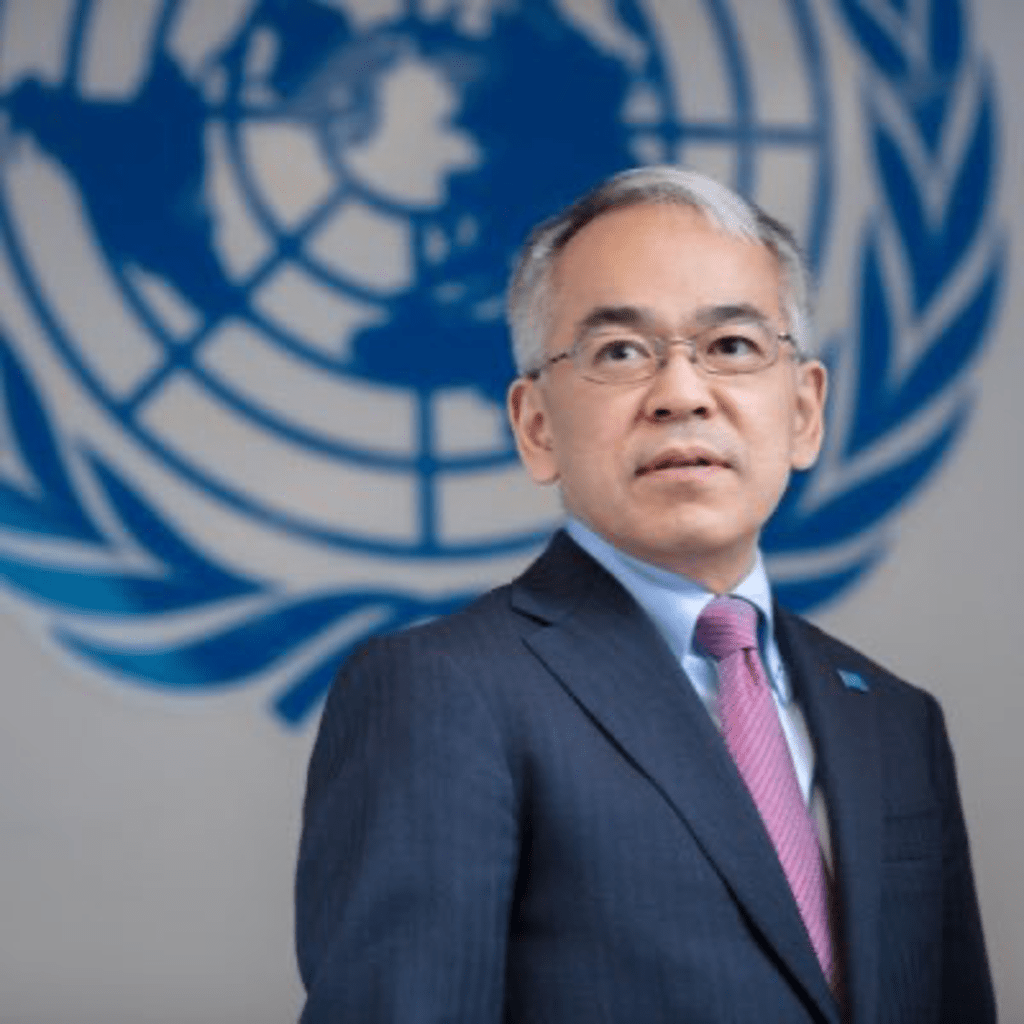 In your work in Indonesia, why do you think South-South cooperation matters?

Mr. Shimomura considers it very valuable to harness the power of South-South and triangular cooperation within UNDP given that it  is a large knowledge entity and a network.   “UNDP has prioritized South-South and triangular Cooperation (SSTC) for decades as a means of knowledge sharing and to assist countries working with other countries to develop further,’’ said Mr. Shimomura. “South-South cooperation is, in a sense, a universal approach that has been recognized for quite some time. Its value has not changed in the past decades. That is how I see the value of South-South cooperation.’’

Mr. Shimomura  believes thatIndonesia is still facing some challengesand has many things to learn from other countries but has much to offer. “Indonesia has accumulated a wealth of expertise and experience that it is willing to share with other countries’’, he said emphasizing that Indonesia aspires to be a bigger and better citizen of the international community. Therefore, for Indonesia, South-South cooperation does matter and is embedded in its international development cooperation framework.

‘’The value of Indonesia is to bridge and connect. Indonesia has the trust of other countries since the Bandung Conference in 1955. As Indonesia becomes a voice in G20, it is in an excellent position to represent the pragmatic interests of developing countries’’, he added.

Establishment of Indonesian Agency for International Development: UNDP supported the establishment of the Indonesian Agency for International Development (Indo-Aid). He notes that the challenges he saw in Indonesia were very similar to Kazakhstan’s challenges when they established their own Aid Agency.  UNDP has been working closely with the Ministry of Foreign Affairs in Indonesia towards a strategy for future assistance or cooperation through Indo-AID. Indonesia has allocated almost USD 800 million towards an endowment which generates income for its ODA. The mechanism and strategy are in place; however, implementation mechanisms need to be put in place. “Opportunities for collaboration with the UN and international organizations for financial assistance are abundant,” he said.

UNDP coordination with the Coordinating Ministry for Maritime Affairs and Investment of Indonesia: UNDP Resident Representative and the Coordinating Minister for Maritime and Investment Affairs co-chair the Archipelagic and Island State (AIS) Forum which focuses on cooperation on the blue economy, joint maritime research on ocean-based climate solutions and blue financing. UNDP hosts the Secretariat. Mr. Shimomura called it “a great initiative with over 25 participating archipelagic and island countries from around the world”. Some of the participating countries are Timor-Leste, Singapore, Maldives, Japan, Sri Lanka, Ireland and the Philippines.  He suggested that an institution like the AIS Forum could evolve into a delivery mechanism for Indonesia’s future assistance and cooperation.

Innovative Financing: Indonesia takes a lead on leveraging innovative financing solutions to advance sustainable development and UNDP has played a key role in unlocking untapped resources and driving capital flows towards the Sustainable Development Goals (SDG)s. One of the milestones is the partnership with the Ministry of Finance and other relevant ministries in Indonesia to introduce the world’s first sovereign Green Islamic Bond or Sukuk. Through Green Sukuk, Indonesia has raised over USD 3.9 billion to finance climate change related projects, and now works on the issuance of SDG Bond and Blue Sukuk. As a regional knowledge hub for innovative financing, UNDP is actively sharing its experience with other countries.

Mr. Shimomura spoke about the reality of shifts in priorities in rapidly changing environments. “South-South cooperation is a very broad concept.  For some reasons priorities for countries change, the needs for development assistance change, the prevailing environment around ODA changes and even people engaged in partner countries change. The results from these shifts may be a delay to respond to the needs. However, this flexibility keeps South-South cooperation agile and relevant in a quickly changing world,”he said.  “For instance, we have seen admirable efforts taken to elevate the ambitions of SDGs to ensure green and inclusive recovery from the COVID-19 pandemic’’, he added.

Mr. Shimomura is of the opinion that South-South cooperation should not be considered an exception but as a mainstream means to deliver development assistance. “We just have to have a dynamic model of South-South cooperation, which it should not be perceived as the 20th century cliché of poor country working with poor country. Many countries have come a long way already, and every country in the world has a comparative advantage in something. South-South cooperation is about that comparative advantage, as well as proximity among developing countries. It is about  mutual collaboration that yields results far larger than the sum of individual countries’ abilities.  It is about mutual learning and mutual respect.’’

The concept of South-South cooperation is not static. “There are many layers of the so-called South. The majority of countries of the South have become middle-income and upper-middle income countries. That’s why the definition of SSC has to be very dynamic as the roles of these countries evolve and vary.” Mr. Shimomura highlighted that the increasing roles of the private sector in SSC as the main driver of economic growth in the Global South should be accelerated, in addition to the need to recognize the increasing importance of other non-state actors such as Civil Society in South-South Cooperation.

Do you have any upcoming proposals/ideas/projects incorporating South-South cooperation in 2021?

Firstly, the Resident Representative envisages that the participation of UNOSSC in the Archipelagic and Island State (AIS) Forum would be desirable and supportive of UNDP.

Secondly, he highlighted a knowledge sharing initiative between UNDP offices in the region.  “The UNDP Regional Bureau for Asia and the Pacific (RBAP) has introduced an innovative facility to promote knowledge sharing between UNDP offices in the region, i.e., the Capacity for Experience Sharing Initiative (CESI). Four to five countries have been selected as active providers of knowledge and experience, and Indonesia is designated to share its experiences on innovative SDG finance.  Mr. Shimomura proposed a collaboration with UNOSSC to document Indonesia’s experience and innovative financing. He mentioned his readiness to share UNDP Indonesia’s other notable experiences such as with the Islamic finance and green and sustainable bonds through events and platforms that might be offered by UNOSSC.

Mr. Shimomura reiterated that South-South cooperation plays an important role in development. It is a fluid exchange between all countries and their institutions in their respective areas of comparative advantage – each country regardless of their status of economic development has rich experience in some areas that could be shared with others.  “We truly need to appreciate that solutions are often found in the communities and in the countries of the South. Many are quickly transitioning into the developed South,’’ he said. He also observed that South-South cooperation is changing, noting that examples from some countries of the South are more relevant for less-advanced countries from the South.

“The fastest developing countries of the South have the latest technology and the latest methodologies. These are cutting edge solutions for attainment of the SDGs,” he added. “We need to sincerely appreciate and exploit this new order. We also seriously need to invest in learning on good practices and lessons learned from the on-going South-South cooperation. It is crucial that we actually build on the past lessons and success!”

Mr. Norimasa Shimomura started as UNDP Resident Representative in Indonesia on 1 October 2020.  He has more than 25 years of experience at the United Nations, promoting sustainable human development in many countries.

Prior to that, he was Economic Advisor at the Permanent Mission of Japan to the United Nations serving as delegate for the GA Second Committee, ECOSOC and its subsidiary committees, and UNDP/UNFPA Executive Board.  He started his career as UNDP programme officer in Turkmenistan and Bosnia-Herzegovina.