“Indonesia is committed to increasing its role in the global community to overcome development challenges using the framework of international development cooperation. It is an embodiment of commitment to the Bandung Spirit of the 1955 Asia-Africa Conference. The South-South and Triangular Cooperation programme is a part of national development priority.” (His Excellency, Dr. Suharso Monoarfa, 27 August 2021) 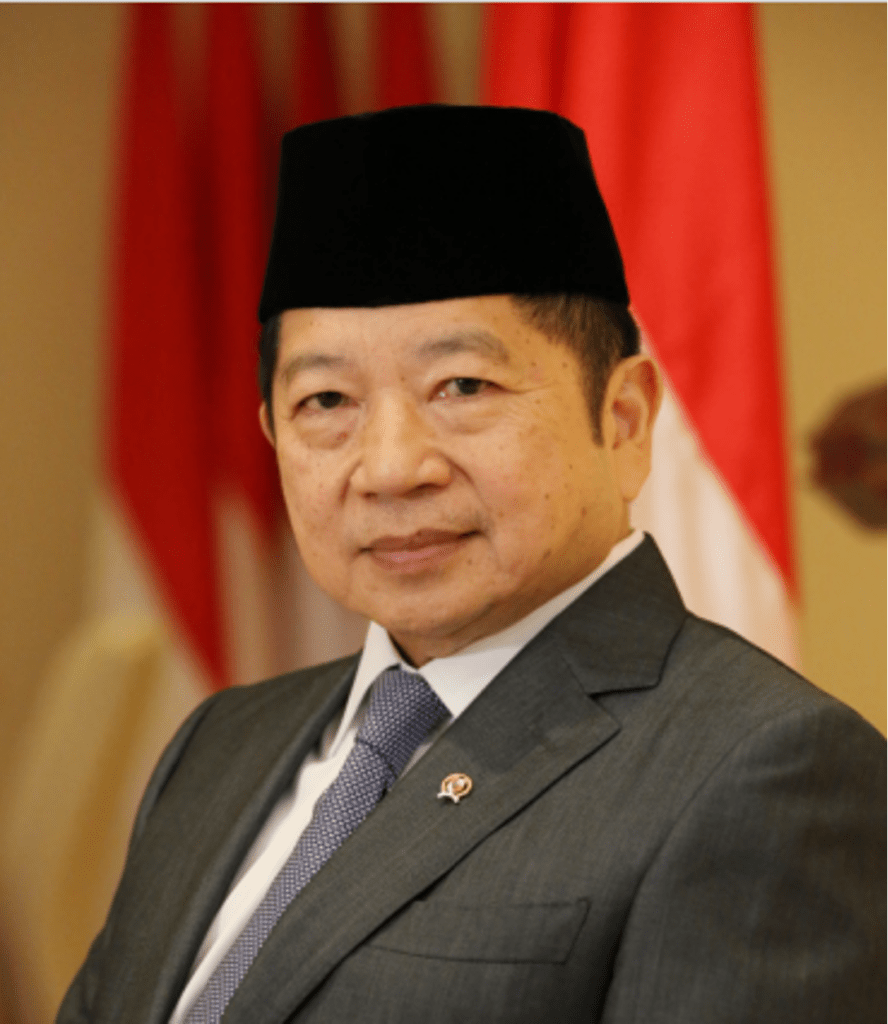 UNOSSC is grateful to H.E. Dr. (H.C.) H. Suharso Monoarfa, Minister of National Development Planning and Head of Bappenas for sharing his perspectives. Held on 27 August 2021, the interview was organized by the Directorate of Foreign Policy and International Development Cooperation led by the Hon. Deputy Minister of Politics, Law, Security and Defense Affairs, Dr. Slamet Surdasono.

In the context of the difficult period that the global South is going through, how has Indonesia used South-South and triangular cooperation to respond and recover from the COVID-19 pandemic?

His Excellency Dr. Suharso stated that international development cooperation is one of the drivers for economic recovery and indeed for dealing with and recovering from COVID-19.  “It is a real opportunity to turn the COVID-19 recovery for a more equitable, inclusive, and sustainable future”, he said.

In the context of pandemic, Dr. Suharso highlighted that the Government of Indonesia is not only focused on overcoming the pandemic at the domestic level and helping the Indonesian diaspora in several countries, but that the country is also trying to consistently contribute to South-South and triangular Cooperation (SSTC) in the form of training and technical assistance to other developing countries. Pertaining to COVID-19, Dr Suharso indicated that Indonesia provided aid to three countries in the Pacific region for COVID-19 impact mitigation, namely, Solomon Islands, Timor Leste and Fiji. The aid financed the procurement of medical devices produced by Indonesian producers. Furthermore, Indonesia has collaborated with several countries during the pandemic including Afghanistan, Antigua and Barbuda, South Africa and Timor Leste, and also provided grants of approximately USD29,300,000 for humanitarian aid and COVID-19 responses to fellow developing countries, mostly in the Pacific region.

Dr. Suharso urged the international community to pay more attention to developing countries’ access to COVID-19 vaccines, especially in reference to the equitable distribution of the vaccines, “because there’s a vaccination gap among the countries, between developed and developing countries”.  The Minister spoke about his efforts towards vaccine equity. “At the national level, National COVID-19 Response and Economic Recovery Committee coordinated responses, meanwhile, at the regional and global levels, Indonesia has been active to support the accessibility and affordability of the COVID-19 vaccine distribution through multilateral mechanisms, one of those is COVAX mechanism.”  Indonesia served as the Chair of the Foreign Policy and Global Health Initiative in 2020 under the theme “Affordable Health Care for All”.

“Indonesia is encouraged to build preparedness and resilience with respect to the access to vaccines. Indonesia is committed to supporting the access and distribution of vaccines, particularly for other developing countries,” he said.

Indonesia plays an increasingly prominent role in South-South and triangular cooperation. Can you explain to us the reasons and ways Indonesia has deepened its role domestically, and internationally?

Dr. Suharso shared three main considerations that Indonesia takes into account in its positioning as an important actor in South-South and Triangular Cooperation, i.e., historical, political, and economic aspects.

On the historical front, he recounted Indonesia’s role as the initiator of the 1955 Asian-African Conference (AAC) and the Non-Aligned Movement (NAM) for developing countries as these are considered the bedrocks on which South-South cooperation was built. On the political front, he stated that the Indonesian Constitution gives a clear direction to implementing “active and free foreign policy”.  Relating to the economy, he said Indonesia is a middle-income country and a member of the G20 (that brings together 85 per cent of the world’s economy). Indonesia can therefore contribute to development cooperation discourse in these fora.

In 2022, Indonesia will host the 17th meeting of the G20. “As a member of the G20, Indonesia holds a vital responsibility and opportunity to continue to contribute to tackling global problems. For the last few years, Indonesia has accented its efforts to increase its prominent role in international development cooperation and global international development as a representative of countries from the Global South. Indonesia’s foreign policy is a reflection, extension, and continuation of domestic policy that gives Indonesia, among others.

Dr. Suharso highlighted five objectives for applying South-South Cooperation: “(i) building a positive image of Indonesia, (ii) increasing the potential to stimulate the national economy, (iii) as Indonesia’s contribution to the world, (iv) serving as advocate for developing country interests in international forums, and (v) forming alliances with a variety of countries and international organizations.”

The Minister also spoke about Indonesia’s work in strengthening the institutionalization of SSC at home. Indonesia formed a National Coordination Team for South-South Cooperation (NCT SSC) to strengthen SSTC, consisting of four Ministries, made up of the Ministry of Foreign Affairs, Ministry of National Development Planning, Ministry of Finance, and Ministry of State Secretariat. He mentioned that Indonesia’s South-South assistance usually consists of education, experience sharing, training, equipment, and knowledge transfer rather than financial support. He reiterated that “Indonesia is committed to increasing its role in the global community to overcome development challenges using the framework of international development cooperation. It is an embodiment of the commitment to the Bandung Spirit of the 1955 Asia-Africa Conference. The South-South and Triangular Cooperation programme is a part of national development priority.”

The Minister also related Indonesia’s contributions and commitment to South-South and Global development. Since 2010, Indonesia has provided assistance to developing countries through the South-South and Triangular Cooperation framework through more than 460 programmes, with an estimated total funding of more than USD 44 million. Indonesia also contributed USD 1.5 million to the World Bank South-South Facility.  He added that Indonesia has been active in 200 international organizations and participated on several global initiatives such as the Global Partnership for Effective Development Cooperation (GPEDC).

Does Indonesia have any proposals/ ideas/ projects incorporating SSC in the next few years?

Dr. Suharso further explained that to improve the effectiveness SSTC, the country established an Agency for International Development (Indonesian AID) in October 2019. “The SSTC projects will be closely coordinated between the Task Force for Indonesian AID and the Coordination Team on South-South Cooperation Indonesia (NCT),” he said.

Regarding future plans, he said that, “Indonesia will establish a one-stop mechanism and digital platform for Indonesian AID, both in terms of planning, monitoring, programme implementation, as well as budget management.” He anticipated UNOSSC’s continued support with experts for strengthening the capacity of Indonesian AID, and hoped that this would help Indonesian AID to actively coordinate and synergize the country’s international assistance.

His Excellency also recognized the need to improve the domestic capacity for conducting international development cooperation.  Indonesia will provide training to strengthen the capacity of Indonesia’s officials, including the Resource Centres, in designing effective development cooperation activities. It is intended that the training will be supported by the Islamic Development Bank as well as UNOSSC.  Following the triangular cooperation on the village innovation with UNOSSC, the Minister urged the need to deepen knowledge sharing and innovation for the benefit of other regions and other countries. “Bappenas stands ready to continue facilitating efforts to establish the South-South Centre of Excellence on Village Innovation to strengthen Indonesia’s SSTC capacity,”he added referring to the ongoing collaboration with UNOSSC.

The Minister expounded on Indonesia’s plans during its G-20 Presidency in 2022. Under the theme “Recover Together, Recover Stronger”, Indonesia will, through BAPPENAS, showcase several South-South and Triangular Cooperation with the neighboring countries in Asia-Pacific. An example is the health of livestock initiative (eradication of brucellosis) with Timor Leste, targeting improvement in trade and investment in the region and strengthening the multi-stakeholders partnership on coconut development and aquaculture sector for Asia-Pacific in collaboration with UNESCAP He added that Indonesia will continue to improve its development cooperation through innovation, among others by initiating the Reverse Linkage Programme with the Islamic Development Bank. Under the Reverse Linkage, Indonesia actively engages the private sector, academia, and NGOs to ensure the sustainability and the inclusiveness of the development cooperation activities. The Ministry of National Development Planning/Bappenas is working to measure the economic impact of international development activities including the level of participation of the private sector and other non-state actors.

Speaking about the unprecedented impact of COVID-19, he noted that the crisis has not only exposed the fragility of the current system’s functioning across the globe but has also provided a powerful lens to examine the underlying conditions that led to this fragility, and illuminated gaps in economic and social value chains, providing the opportunity to improve economic resilience and related issues. Thus, exploring partnership opportunities with new stakeholders in the private sector, and innovative financing methods and digital solutions, are critical in building forward better. Partnership, as one of the Goals in SDGs, should be the framework to be strengthened by all countries. Collaboration and solidarity among countries to overcome global challenges needs to be improved and strengthened.

How can UNOSSC further facilitate Indonesia’s work to help scale up South-South Cooperation and triangular cooperation?

His Excellency acknowledged the role of the UNOSSC in coordinating, promoting, and mainstreaming SSTC at the regional and global levels as well as the United Nations system wide. He indicated that the establishment of the South-South Galaxy, a UN systemwide knowledge-sharing platform for SSTC is one of the great initiatives in digitalization that will help Indonesia in scaling up its SSTC and at the same time promote the work of the Indonesian Agency for International Development (Indonesia AID).

He stressed that the future of SSTC must focus on and prioritize access to the COVID-19 vaccine, which is the basis for opening opportunities for achieving other SDG targets.

“The existence of a global vaccination gap can pose a new threat because the mutated virus will become more infectious and deadly. The world needs a global vaccination plan, equitable distribution, coordinated implementation and financing, and support national vaccination programmes”, he said.  He hoped that UNOSSC will be able to undertake strategic steps to respond to the vaccination gap through vaccine production. He suggested that a coordinated approach by the global South would be an important contribution to resolving the gap in access to the vaccines.

He highlighted the role of Indonesia in promoting the establishment of the Emergency Task Force for COVID-19 Vaccine Cooperation among Developing Countries. He spoke about the discussion with UNOSSC Director ai. on the 13 July this year about the vaccine gap between developed and developing countries and said “the idea that emerged was the need for cooperation between the developing countries in the form of an emergency task force”.

The concept of the emergency task force is under discussion within Indonesian stakeholders, involving relevant ministries, research institutions, and the pharmaceutical industry. The emergency task force will be a platform for both North-South and South-South development cooperation in handling and preventing pandemics, including the cooperation in the procurement of vaccines and other medical devices, technology transfer, and research collaboration to strengthen technology, as well as capacity building in the health sector.

Suharso Monoarfa, nicknamed Sumo by closest friends, started career as a businessman for 20 years. After showing some successful results in business field, Suharso became professional politician in 2004. Suharso has been actively participating in numerous development projects in the country. Those experiences have shaped his career as well as equipped him with various essential soft skills. Suharso’ contribution to public affairs started when he was trusted as The Minister of Public Housing and member of Presidential Advisory Council. Currently, Suharso is appointed as The Minister of National Development Planning/Chairman of National Development Planning Agency.