The rage of COVID-19 continues to ravage lives and livelihoods across the globe. It is becoming evident that the consequences of this misfortune will be relatively more pronounced and far-reaching in the Least Developed Countries (LDCs) – one of most structurally disadvantaged groups of countries in the world. About a quarter of the United Nations memberships (47 countries) belong to the LDC group, accounting for 12 per cent of world population as against less than 2 per cent of global gross domestic product (GDP) and less than 1 per cent of global trade and foreign direct investment (FDI). These countries, punished by geography and penalised by history, host a disproportionately high share of poor people of the world—about 40 per cent.

According to the World Health Organization (WHO), as of 12 April 2020, 1,696 thousand people have been infected in 213 countries and territories, causing about 106 thousand deaths, of which 4152 infections and 145 deaths took place in 41 LDCs. The affected LDCs may have a lower number of confirmed cases of infection (largely because of low level of testing) compared to other countries in Asia, Europe and North America, but the death rates in some affected LDCs are much higher. For instance, Malawi (16.67 per cent) and Mauritania (14.29 per cent) are experiencing higher death rates than some OECD countries, e.g. the United States of America (3.76 per cent) and Italy (12.79 per cent). 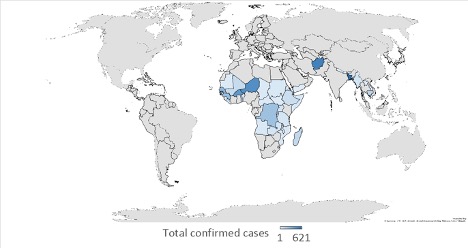 Source: Authors’ illustration based on data from the World Health Organization (WHO). Note: Darker shades indicate higher number of cases in the affected LDCs.

Understandably, capacity of the LDCs to deal with a pandemic of such nature and scale remains modest. LDCs have on average 0.6 nurses and midwives, 0.3 physicians and 1.1 hospital beds per 1,000 population. The comparable figures for the OECD countries are 8 nurses and midwives, 2.9 physicians and 4.7 hospital beds for every 1,000 population. The LDCs on average spend less than 2 per cent of their GDP as public expenditure on health care. Given their narrow fiscal space, their immediate ability to augment public expenditures in healthcare is very limited. As a result, economic and healthcare vulnerabilities are causing higher death rates in LDCs even though their population below 15 years old accounts for 39 per cent of the total population, compared to only 18 per cent in the OECD countries.

The looming socio-economic tsunami with concurrent health shocks could be catastrophic for the LDCs, leaving them farther behind in their pursuit towards the Sustainable Development Goals (SDGs). However, effective state intervention in the area of preparedness and support from the global community may smoothen the peak of the curve of fatality as well as enable the exit from the crisis.

With any significant global support yet to arrive, the national governments in LDCs are vigorously engaging themselves in containing the Corona virus. State of emergency has been declared in 17 LDCs and curfews have been imposed in 13 LDCs. Nine LDCs including Lao P.D.R and Nepal have been in lockdown for weeks. Schools, offices, conferences and other big gatherings have been called off in most LDCs and social distancing is being maintained. At least 14 LDCs have created national committees and task forces on issues ranging from various health, technical, scientific and economic concerns related to COVID-19. Others like Bangladesh have imposed holidays to restrict movement.

A range of protective measures have been taken to prevent imported transmission – a major source of infection in LDCs – starting with airport health checks, entry and exit bans to border close down and suspension of all international flights. Some unaffected LDCs like Kiribati have taken strict measures like entry bans on those coming from any country with local transmission, allowing them to enter only after a 14-day quarantine in a non-infected country while LDCs like Burundi have taken only limited containment measures. Cruise ship trips have been cancelled by Vanuatu. Quarantine practices in most LDCs have been made compulsory for people coming from high risk countries. The governments (e.g. in Afghanistan) also have to deal with social tensions arising from measures like discouragement of holding funerals and other congregations in religious premises.

Regrettably, public health distress is now shaping an economic misery in the LDCs. Because of the breakdown of both backward and forward supply chains, income and employment are being lost across the sectors, particularly those having cross-border activities. Readymade garments (RMG) dependent LDCs like Bangladesh are severely affected as orders worth USD 3.15 billion have already been cancelled, affecting 2.25 million workers in 1,134 factories. On the other hand, in Cambodia, one in six factories have suspended work, affecting about 60,000 workers. Service exports will gravely suffer, affecting Island LDCs like Vanuatu, where tourism exports constitute of 63 per cent of GDP. Solomon Islands will be hard hit by loss of log export to China, which constitutes 94 per cent of its export basket. Volatile commodity prices and the oil price plunge to an 18 year low has added to the woes of the oil dependent LDCs like Angola and Timor-Leste.

The current account balance as well as overall balance of payment of these countries are expected to deteriorate further. Signs of weakening national currencies are showing up. Moreover, remittance flows to LDCs have started to shrink, no less because of the slump in oil price hitting the economy of the host countries in the Middle East. Loss of market predictability and investor confidence may preempt flow of FDI as well as investment from domestic sources. All these effects are also spilling over to the money market and capital market in the forms of growing non-performing loans, tumbling stock prices, increased capital outflows and widening bond spreads. In the face of stagnating domestic resource mobilisation and faltering concessional foreign finance, public expenditures in the near future may get constricted in social sectors of LDCs. Unemployment rate is already spiking, particularly due to daily labourers and those involved in informal activities as markets remain closed. Pressure on the food situation is building up in the net food importing LDCs.

To deal with the impending economic depression, the governments of the LDCs are taking measures to funnel liquidity in the economy and considering measures to expand their fiscal space. According to latest updates from the International Monetary Fund, 22 LDCs have declared stimulus (and bailout) packages of around USD 1.9 billion as fiscal response to COVID-19. This amount is equivalent to about 0.4 percent of their GDP on average – a far cry from a comparable figure of about 3 per cent of GDP announced by the Group of Twenty (G20) countries. Even this modest average size of the stimulus package is greatly influenced by a couple of outliers. For example, Bangladesh alone accounts for the large amount, i.e. USD 588 million. Given the dynamic nature of the situation, these numbers are constantly changing and most of these amounts announced are declared to be revised upwards in the coming days. For instance, Haiti expects to raise its expenditure by 1.6% of GDP. Revision of the existing 2020 budget plans is being done by most of LDCs. Resources and funds are diverted from other sectors to increase expenditure in COVID-19 impacted areas. WHO is providing support to some LDCs like Central African Republic and Sudan to prepares its health response and preparedness plans. Some international funds are flowing in to realise the needs of the LDCs. Gambia has received US$10 million in grant financing from the World Bank for COVID-19 response and preparedness project. Madagascar and Liberia has also received international support from multilateral organisations. On the other hand, other LDCs are seeking financial support from international financial organisations and development partners to implement additional measures. For some LDCs, actions are planned relying on support from the international community. An action plan worth USD 130 million has been prepared by Togo relying on support from the development partners. Bangladesh has also approached bilateral development partners to support its budget.

The good news for about half the LDCs is that debt service relief has been granted by the IMF for the coming six months under the Catastrophe Containment and Relief Trust (CCRT). Contributions from both South-South and North-South assistance were found here (China and New Zealand). The Government of Solomon Islands is receiving, both, funds and medical supplies through South-South cooperation as well as North-South cooperation through bilateral channels from several countries including Australia, China, New Zealand, and the United States to support its COVID-19 response. Other than these, regional funds have been made available like the South Asian Association for Regional Cooperation (SAARC) COVID-19 Emergency Fund, which can support LDCs like Bangladesh and Bhutan.

These funds are mostly being made available for health-related short-term containment and prevention response plans. Bangladesh has put in banking facilities to ensure access to finance by the export-oriented enterprise so that they may continue to pay wages to the workers. Others have targeted social protection and protection of small businesses from the announced stimulus package. Moreover, utility bills are being subsidized by governments like Myanmar and Burkina Faso among others.

Besides the national governments, innovative social and technical solutions are being pursued by the non-state actors in the affected LDCs. Micro-finance entities have suspended collecting weekly/monthly installments from their borrowers. In Bangladesh, NGOs and community based organisations (CBOs) are distributing food and medical assistance to their members and other distressed people in their programme areas. They are also promoting awareness about COVID-19 through community radio stations. Washable masks are being manufactured by NGOs, hand sanitisers are being made by university students, private conference centers are being transformed into makeshift hospitals by the private sector and digital support for working from home is being provided by the civil society organisations (CSOs). Tech entrepreneur Roya Mahboob from Afghanistan with her Girls Robotics Team has come up with an innovative model of making cheap ventilator from Toyota parts. Bangladesh and Senegal are working on producing their own test kits, which gives hope to all LDCs. South-South cooperation can be seen as a complement to North-South Cooperation in advancing development cooperation for these countries.

All these national level responses point towards the inner strength and resilience of the LDC economies and societies. These positive endeavors may encourage the people of these countries to confront the current challenges from a position of moral strength; but will not be enough to recover from the short-term and long-term damages inflicted on them by this unprecedented pandemic.

Our best guess, from the vantage point of early April 2020, is that spread of the Coronavirus is yet to peak in LDCs. It is necessary to systematically and substantively monitor the situation on the ground and assess the recovery and rebound needs of the LDCs. The actors of international development cooperation would need to move soon to create a targeted package of international support measures involving, among others, concessional financial flow, debt cancellation, food aid, market access of exports, availability of drugs and vaccines. South-South cooperation has to play a prominent role in this initiative. The discernible progress made by the LDCs in the recent past, particularly of those in the graduation pipeline, should not be allowed to be wiped away by this unfortunate, unmatched pandemic.